Illusions  in  the  retina

On this page I'm just going to use the model we made on the previous page, so if you haven't yet done that one, go back to the Visual System 1: Retina page and make that one.

Optical illusions do not all occur for the same reasons.  They could be literal, physiological or cognitive illusions.  See here for a nice description.  The retina is a pre-cognitive area of the nervous system, and it is responsible for some of the physiological visual illusions, so that is what I'll be looking at here.

Let's jump right in and test it.  It's very easy to do with the model we have.  We just have to make appropriate light patterns.  I've shown how this is done in the two pictures below.
The bipolar cell we are looking at is the on-centre off-surround one in (Excel) cell E15.  We can ignore the one next to it.  The light pattern is the black and white 3x3 region at the top, and I've colour coded it so that higher numbers show up brighter than darker numbers.
Remembering that bipolar cell activation equates to the perception of brightness, the case on the left will be perceived as brighter than the case on the right - 1.5 is greater, or brighter, than 1.  It's as easy as that.
Now if you imagine that the two bipolar cells have adjacent receptive fields, so they are 'looking at' bits that are next to each other on the Hermann grid (as shown in the picture below), you can see why the area between the lines appear brighter than the area in the crossroads.
In order for the inhibition to occur in the surround of the receptive field, the receptive field must be big enough to cover a little bit of each of the surrounding dark areas of the Hermann grid.  From this, we can predict that if the receptive field is too small, or the Hermann grid too large, the dark spots will not be perceived.  In our eyes, the receptive fields of bipolar cells in our fovea (the centre of our vision) is smaller than that in our peripheral vision.  This is why the dark spots disappear when we look directly at the centre of one of the crossroads.  Below is a picture explaining this which I found on this site.

It would be simple to implement this in the Excel program.  When looking directly at the crossroad (like B in the picture), the bipolar cells with receptive fields in the same position as B, and in the white paths directly surrounding it, would all be too small to hit the black areas on either side, so the light patterns would be uniform (all 4s, say).  You can try this if you like, but any time all the cells in the light pattern are of the same value, the bipolar cell activation is zero. 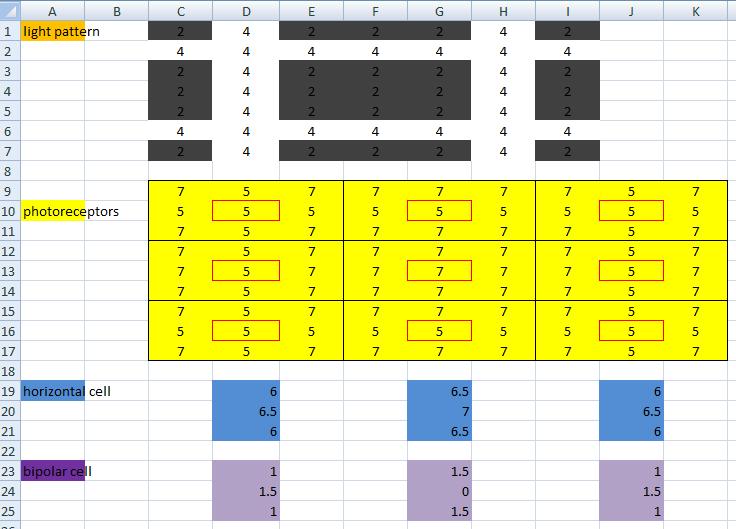 The next kind of illusion we'll investigate is the Mach bands style ones.  The test we'll perform is equivalent to either of the two illusions I showed above and again here:
It's very easy to model, and we can use the same larger retina model that we've just been playing with.  All we need to do is make a small square on the light pattern that has a constant brightness while all other cells are first darker, then lighter, and check the activation of the bipolar cell whose receptive field is most responsible for the constant square.

So, that's an easy demonstration of the neural physics of why we experience two commonly known visual illusions.  Here are a couple of papers where you can read more:
Visual Illusions and Neurobiology                    Exploring Sensory Neuroscience Through Experience and Experiment
and here is a powerpoint on the same topic:
Sensation & Perception PPT