Vision is the primary sense in humans.  In our everyday lives, we judge books by their covers, select mates based upon their face structure, shape of their body, skin tone, dress sense, and choose products based upon what's on the outside.  It is very difficult for us to see past what we see!

This truth is echoed in our visual system, with a large portion of mammalian brains being dedicated to visual processing.  Our primate fovea (the most high-definition part of our retina) is packed with cone shaped photoreceptors which have a one-to-one (though indirect) connection with their respective ganglion cells.  This means that, since each ganglion cell is dedicated to only one photoreceptor, much more visual detail can be extracted from the scene.  Moreover, about 35 million years ago the primate retina evolved an extra type of colour receptor (the cones), so that while our mammalian cousins tend to be dichromats, we are trichromats.  Here is a nice site that gives an example of how it would be to have less photoreceptor types.

On this page I'm going to show a simple little model of the retina.  Information that goes to our brain via our eyes undergoes a lot of processing on its way to being recognised as objects (see the Neurons fire & ideas emerge model).  However, here I'm just going to focus on the very first layer of this processing - the stuff that happens in the back of the eye.

The input to the retina is, obviously, light.  It is in the form of a two dimensional array of colour intensities.  The problem that the visual system has to solve is the conversion of this 2D array to a symbolic understanding of the objects in the surrounding area.  It's difficult for us to grasp the difficulty of this task, since we do it so effortlessly, but if we consider what the photoreceptors are actually sensing, we can see the problem.  Here is a 2D array of colour intensities:
The problem is solved in stages, and the full process is still far from understood.  But the retina's contribution is reasonably well understood, and that's all this model will focus on.  The bipolar cells of the retina basically perform two functions: they pick out areas of contrast, like the outlines of objects, and they somewhat reduce the problem of viewing the same object in different lighting conditions.  These are the two functional abilities of the retina that we will recreate.

The bipolar cell is the first cell that shows the famous centre-surround receptive field property.  It is by way of this that it picks out areas of contrast and largely ignores differences in lighting.

There are two pathways between the photoreceptors and the bipolar cells.  The first is the direct pathway, where the photoreceptors that pick up light in the centre of the receptive field are directly connected to the bipolar cell.  The other is the indirect pathway, where a horizontal cell intervenes in the connection between the photoreceptors that pick up light in the surround of the receptive field and the bipolar cell.  This is how the contrast between centre and surround is achieved.
The general test is shown in the diagram below.  The blue bar is a bar of light (the colour is not important).  In A1 the light is only hitting a portion of the surround.  Since the surround is OFF, this bipolar cell's output will be inhibited so it is less than its resting activity.  In A2 a portion of the surround is still being hit by light, but the whole of the centre is covered by the light bar.  It is not absolute area that matters, but the proportion of the area, so in the cell in A2, the activation of the ON centre will outweigh the inhibition of the OFF surround, causing this cell to be active above its baseline (resting) level.  The case for A3 is fundamentally the same as for A1.  In A4 half of the centre and half of the surround are covered by light, so the two will cancel each other out and the cell will remain at the baseline level of activity. 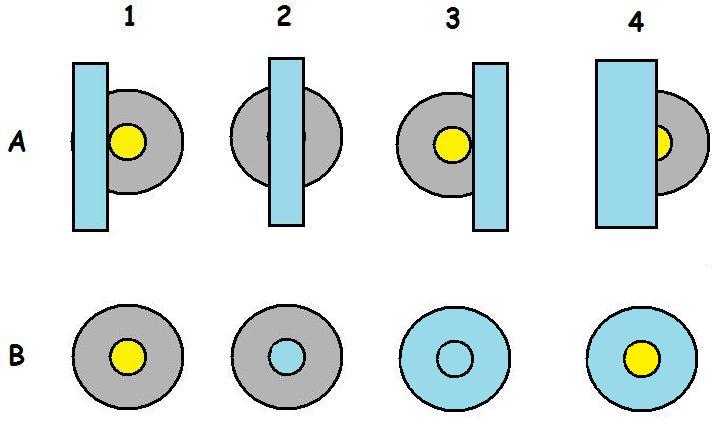 In the lower row, B1 has no light shining on it, so it will be active at its baseline level.  B2 has light completely covering its centre, but not touching any of its surround, so it will be maximally active.  In B3 the whole receptive field is covered by light, so the centre activation and the surround inhibition will cancel each other out and the overall activity will be the same as in B1 and A4 - baseline level.  In B4 the OFF surround is completely covered by light, but none of the ON centre is, so this cell will be maximally inhibited, way below baseline activity.

The next test is taken from Hubel's book.  Here's the link to where it's described.  Basically, if the centre-surround receptive field configuration is correct, then it shouldn't matter what orientation the bar of light is at - if it passes through the centre, then the activation will always be the same.  So, in the diagram below, all four cases will cause the same level of activation, because in each case the same proportions of centre and surround are stimulated.

In passing, I should mention that it seems that the horizontal cells in the retina are not attached to the cell body of the bipolar cells.  Horizontal cells are strange in that they do not have axons, but have dendrites that both receive and send signals.  Rather than the horizontal cell --> bipolar cell body configuration shown in my picture, the horizontal cell has a dendrite that intervenes in the synapse between the central photoreceptor and the bipolar cell.  Functionally, this is the same as what I have shown here.
You might be wondering why the numbers need to be opposite between the light pattern and the photoreceptors.  You're not the only one!  However, dark regions are just as useful as light regions in recognition, so we should try to suppress our natural expectation that light be the only thing the retina is looking for.  Biology does not have foresight or expectation, so does not work to any plan, and has not concern about what is 'easier' for us to understand - just what functions.  For this reason, we'll find many bits that look like they could have been designed better, but just weren't!
Test that your bipolar cell is working correctly.  We will simulate presenting light only to the central photoreceptor by changing just the value of the central cell in the light pattern (D2 on my Excel sheet).  If you put a 0 in there, the bipolar cell should output -9, meaning when no light is presented to the photoreceptors, the bipolar cell is maximally inhibited by the photoreceptors.  Now try putting 9 into the central light pattern cell.  The bipolar cell should output 0, meaning that when maximal light is presented to the centre of the receptive field, the bipolar cell is not inhibited at all by the photoreceptors.
This is all a little hard to follow - photoreceptors being turned off by light, then the bipolar cell being less inhibited as a result.  As I said before, this is unfortunate for us, as we have to struggle to get a grip on what's happening, but this is of no concern to the cells in the retina.
Notice that there's no minus sign, so the inhibition of the photoreceptors is not cancelled out as it was in the bipolar cell.  There are 8 surround cells here, and they are supposed to work in roughly balanced opposition to the single centre cell, so I've normalised them by dividing by 8.

The model above is only of an ON centre OFF surround cell.  But I said earlier that bipolar cells come in two flavours, the other one being the OFF centre ON surround kind.
After making the ON centre cell above, you should be able to make an OFF centre cell yourself just by reversing the signs from the photoreceptors to the bipolar cell in the direct pathway, and from the horizontal cell to the bipolar cell in the indirect pathway.  Try this yourself.

In case you get confused, or are just too lazy, here is the one I made: