Computational Neuroscience     in  excel
This page will take what we have learnt from building and playing with the neurons in Excel and use this to develop a theoretical understanding of what a neuron does.  We'll use Excel again later, but for the most part, you'll need a pen and paper for these exercises.

In order to work out the theory of how a neuron uses input parameters (such as albedo and sweetness) to decide into which category the input falls (something worth eating or not), let's compare a neuron that can't perform successful categorisation with one that can.


We'll continue using the model we developed first, which decides which foods to eat according to this logic table-->

Below I've set down the parameters (weights and thresholds) of the two neurons, and provided a graphical model (a picture!) and the Excel model of each.  Just to make it easier to talk about them, I'm going to name neuron 1 Mr Fail and neuron 2 Miss Success.

Now it’s time to write what happens in mathematics.  The first thing to do is to formulate what you want to say in words:

·         Fire (output 1) IF stimulus one times weight one plus stimulus two times weight two has a value equal to or greater than the threshold.

Answer is at the bottom of the page  *


It’s a very simple matter to use this formula to calculate the behaviour of a neuron.  Have a check back at the diagrams for Mr Fail and Miss Success above.  On a piece of paper, use the formula to calculate the behaviour of both neurons when presented with marmite (S1 = 0, S2 = 1), and when presented with ice cream (S1 = 1, S2 = 1).

Example for Mr Fail is at the bottom of the page **

So, Mr Fail is not behaving correctly, but Miss Success is.  This raises the question of exactly how the neural network is able to determine this.  If we look at Miss Success, what are the two synapse values of 0.5 and 0.6 and the threshold of 1 doing in order to allow her to correctly determine that she should eat when presented with ice cream, but not in any of the other three situations?  This is where computational neuroscience and connectionist networks really have a problem - they are hard to interpret.  Is there any way of looking at a bunch or numbers (in this case only three numbers, but, of course, psychologically interesting networks are way more complex than this) and gleaning an understanding of how the network is doing what it is doing (the algorithmic level of Marr's tri-level hypothesis)?  The mathematics that we have just seen provides us with a good way to visualise this.

I wonder if this formula looks familiar to you..?

If you are like me when I first became interested in neural networks, you may have a vague recollection of a high school teacher going on about this.  It is actually the equation for a straight line.  x is the distance along the horizontal axis and y is the up the vertical axis.  m is how steep the line is (its gradient) and c is where the line cuts through the y axis.  Here’s an example: 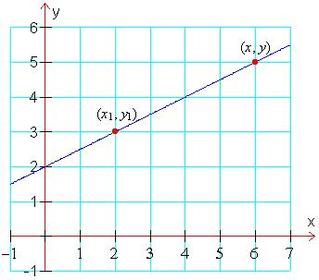 What is the equation for this line?


The line cuts through the y-axis at two,
so the y-intercept, c, is 2.

But what we are interested in is neural networks!  So why are lines relevant?  Well, a really big leap in understanding happened when neural network researchers stepped back and looked at the equation of our artificial neurons and compared it to the equation of a straight line.  In order to see the similarity, we need to rearrange our equation a bit.  I will do this.

First you must know that the two variables in the straight line equation are our two sensory inputs, S1 and S2 (they are the only two things that vary depending on what food we present to the neuron!).

Try to follow what I’m doing below:
Now that's done, compare this equation to the one for a straight line:

It doesn’t matter whether we use the = sign, which just tells us exactly where the line is, or the  sign, which tells us the line and everything on one side of the line (the side where the neuron is firing).  So, these are interchangeable in the above equations.

Answer is at the bottom of the page  ***

Below is a scatter diagram where the two sensory inputs, S1 and S2, are the two axes (because they are the variables). 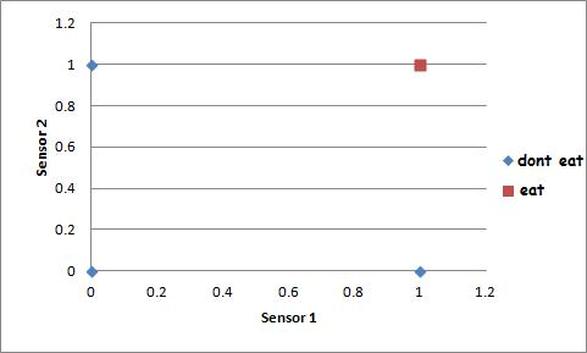 
This is exactly what an artificial network does!  It draws a line which allows it to separate inputs into two categories – those on one side of the line, and those on the other.


An easy way to draw the line is to just choose two different values for x (S1 in the case of our neuron) and use the formula twice to find out the corresponding y (S2) values.  We then plot the two positions on the graph, then connect them with a line.  I’ll use the values S1 = 0 and S1 = 1.

Now that we have two pairs of coordinates for this neuron, we can put both of them on the graph and connect them to give us a line: 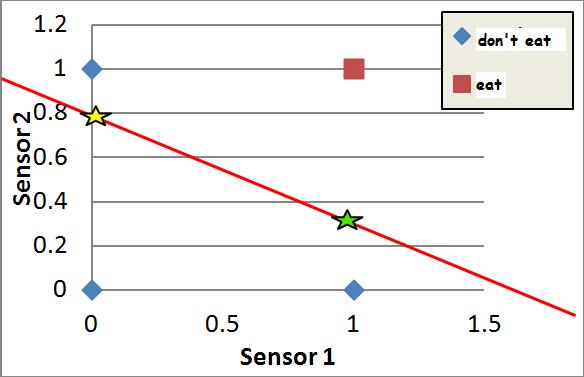 By simply looking at the resulting graph we can see that the red point (the ice cream that we want to eat) is not separated from the blue points (the things that we don't want to eat) by the line.  We can also say exactly what the Mr Fail's behaviour will be.  He will perform correctly when presented with ice cream (he'll eat it, because it is above the line) and when presented with nothing or with salt (he won't eat them, because they are both below the line), but he will perform incorrectly when presented with marmite, since this is on the same side of the line as the ice cream - the "eat" side of the line.

You may be wondering why I used S1 to find S2 when we have the logic table that tells us values of S1 and S2.  Well, remember that Mr Fail's weights are such that his behaviour is incorrect, So what we did with the maths was to choose any value of S1 we liked, then find the value of S2 that would lead to a correct categorisation GIVEN THESE WEIGHTS.  In other words, if the coordinates for marmite were (0 , 0.7) instead of (0 , 1), his behaviour would be correct because the marmite point would now be below the line.

Looking at the line you have drawn, can you say whether Grace is a successful Grak or not?

There is a lot more that we can do with this new mathematical model of a neural network and the visual aid of the graph.  We have essentially imported hundreds of years of mathematical knowledge to help us.

Remember that we saw how changing the threshold could affect the success of the network?  Well, now we can see on the graphs why this is.
First, have a guess.  What do you think will happen to Miss Success's line if we increase T from 1 to 2?  What about if we decrease it to a 0.5 or to a minus number?

There is also the question of what happens to the line if we change the values of the weights.  What do you think will happen if we change just weight 1?  Or just weight 2?  Or both weights?

What will happen if we use non-binary input values?  For example (0.9, 0.85) or (1.1, 0.7).  This is an important question because it concerns a neural network’s ability to deal with fuzzy (unclear) or imperfect input data.


After you have thought about the questions above, see if you were correct by playing with the Excel spreadsheet called LINEAR SEPARABILITY.

It is actually quite easy to predict what will happen with this two input neuron when the weights and threshold are changed just by looking at the mathematics.

By comparing the formula for a line with the formula for our artificial neuron, we worked out that the gradient of the neuron's line was:  -W1 / W2  and the place where the line intercepts the stimulus 2 axis (the y-axis) was: T / W2 .  Here are some facts we can gather from looking at these two little formulas:·


Going back to the Contrary neuron that I described (and you hopefully built) on the Making it Learn page, can you now see why the Contrary neuron was not able to learn the correct behaviour, while all three of the other neurons we built were?
It's impossible!!!
There is no way to draw a single line though this input space so that the output=1 behaviours (marmite and salt) are on one side and the output=0 behaviours (ice cream and nothing) are on the other.

In the early days of Artificial Neural Network research, it was at this point that people lost faith/interest in them.  If they couldn't solve a relatively easy problem like the XOR (the logic table of our Contrary neuron is the same as the XOR problem), then what use were they?

We'll start to see how this problem was overcome in the Neurons working together page.