Logic has been used as a formal and unambiguous way to investigate thought, mind and knowledge for over two thousand years.  The idea is that our thoughts are symbols, and thinking equates to performing operations upon these symbols (info here). I'm going to skip over most of the explanation of this - there are plenty of places to read about it on the net, but what we do need to know is about the three logical operators: AND, OR, and NOT.  We'll also have a look at the exclusive OR operator - XOR.
I'll talk a little at the bottom of the page about the relevance of examining these functions in neurons.

In 1943 neuroscientist Warren McCulloch and logician Walter Pitts published a paper showing how neurons could implement the three logical functions.  The neurons they used were simple threshold neurons (which they named perceptrons).

Let's start with the AND operator.  Looking back at the logic table for the A^B, we can see that we only want the neuron to output a 1 when both inputs are activated.  To do this, we want the sum of both inputs to be greater than the threshold, but each input alone must be lower than the threshold.  Let's use a threshold of 1 (simple and convenient!).  So, now we need to choose the weights according to the constraints I've just explained - how about 0.6 and 0.6?  With these weights, individual activation of either input A or B will not exceed the threshold, while the sum of the two will be 1.2, which exceeds the threshold and causes the neuron to fire.  Here is a diagram:

I've used a greek letter theta to denote the threshold, which is quite common practice.  A and B are the two inputs.  You can think of them as input neurons, like photoreceptors, taste buds, olfactory receptors, etc.  They will each be set to 1 or 0 depending upon the truth of their proposition.  The red neuron is our decision neuron.  If the sum of the synapse-weighted inputs is greater than the threshold, this will output a 1, otherwise it will output a 0.
So, to test it by hand, we can try setting A and B to the different values in the truth table and seeing if the decision neuron's output matches the A^B column:

We have designed a neuron which implements a logical AND gate.

This is easy to implement in Excel.  In fact, it's exactly the same as the neuron we created in What does a neuron do.  Below there's a video that takes you through it quickly.  Bear in mind that while the diagram drawn above flows from left to right, the neuron made in Excel flows down the page.

Updating the Excel file to change it from an AND gate to an OR gate is simple - just change the two synapse strengths!  Check that it works by changing the inputs and making sure the output is as expected, as in the truth table.

Here's a video showing how to make the NOT gate neuron in Excel:

As I mentioned at the top, there is also something called the XOR (exclusive OR) operator.  This actually put a spanner in the works of neural network research for a long time because it is not possible to create an XOR gate with a single neuron, or even a single layer of neurons - you need to have two layers.  First of all, let's have a look at it's truth table.
As I said, it is not possible to set up a single neuron to perform the XOR operation (more details on a later page).  This is where networks come into it.  The only way to solve this problem is to have a bunch of neurons working together.  But we can use what we have learnt from the other logic gates to help us design this network.
I'll start by breaking down the XOR operation into a number of simpler logical functions:
A xor B   =   (AvB)   ^   ¬(A^B)
All that this says is that A xor B is the same as A or B and not A and B.  In other words, it is the same truth table as AvB, but with the A^B line (the bottom line, when both inputs are 1) removed (or set to 0).
This line of logic contains three important operations: an OR operator in the brackets on the left, an AND operator in the brackets on the right, and another AND operator in the middle.
We can create a neuron for each of these operations, and stick them together like this:

Here's a video of me making this network:

So what is the point in implementing the AND, OR, NOT and XOR logic operators in artificial neurons?
I mentioned at the beginning that logic was developed as a model of how our mind works - our concepts of things are the symbols, and the process of thinking is manipulation of these symbols.  So, logic was invented as a model of the mind, and the logical operators that we looked at were discovered to be all that is needed (more or less) to manipulate the symbols in the ways we seem to do.  It is then very reassuring that we can show that neurons are capable of implementing these operators.  Moreover, the fact that over 2000 years of development has gone into logic, and there is a good understanding of how quite complex ideas can be broken down into simpler units (the basic symbols), so by showing that neurons can do the same operations, we justify the use of this massive body of knowledge.  This is why McCulloch and Pitts' looked to logic when trying to understand how the complex behaviours of the brain could be produced by simple cells wired together in different ways.

The next reason is that it is useful (and interesting) to know what, exactly, different configurations of neurons can do.  McCulloch and Pitts originally showed a wide range of logical operators that could be implemented by neurons, but, as we saw above, the XOR cannot be implemented in a network consisting of just a single layer of neurons.  This task is too complicated, and requires a multi-layer network.  Further research showed that even the most complicated of problems could be solved by a network with two layers, like the XOR network on this page (but with more neurons in each layer).  So there is no need for more than two layers of neurons if we only focus on whether or not the problem can be solved by the network (not speed, flexibility, etc).  This leads to the question of why our brains tend to have six layers in the neocortex.  What are the other layers doing?  This is a good example of how modelling and theoretical neuroscience can contribute to the study of the nervous system by pointing out which questions are relevant for a functional understanding of what's going on.

As a little challenge for you, here are the configurations presented in the McCulloch and Pitts paper.  Why don't you try implementing them yourself and exploring their behaviours?  The numbers in the cell bodies are the thresholds of the respective neurons. 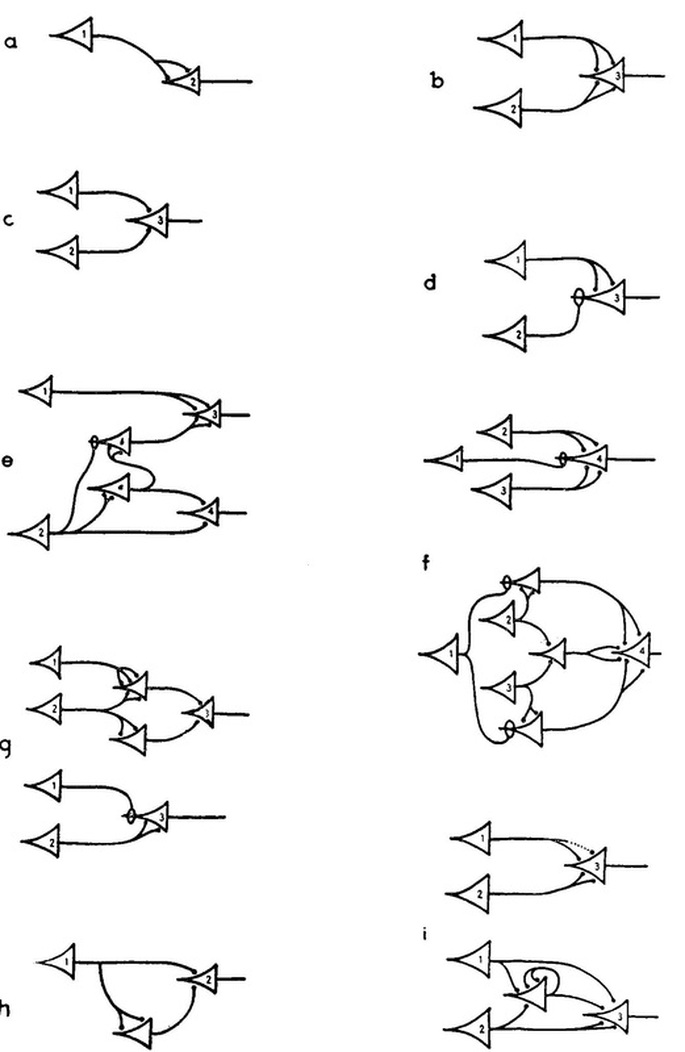 The original paper is here.

And if all of this seems a little far removed from biology, it actually seems like the hierarchy of processing areas that visual (and other) information travels through in the brain are organised in chains of AND and OR gates.  First the AND neurons search for co-active patterns of activation, then the OR neurons fire to signal if a pattern has been sensed anywhere in their receptive field, according to whether any of the AND gates presynaptic to them are active.  I have build a model of this form on my Neurons fire & ideas emerge page.