Computational Neuroscience     in  excel
We know a lot about how neurons function.  At the same time, we know a lot about the psychology of our behaviour, and even about the general brain areas that give rise to these behaviours (cognitive neuropsychology and cognitive neuroscience).  But between these two levels of inspection, there is a great divide that we still know very little about.  This goes by the name of systems neuroscience, where the systems in question can be anything from simple two neuron networks like the half-centre oscillator, up through more complex central pattern generators, to hugely complex systems of interaction between different brain areas, such as the basal ganglia and cerebral cortex.  Furthermore, just as as cellular biology is grounded by molecular biology, which in turn is grounded by chemistry, and then physics, so we seek to ground psychological, behavioural and cognitive sciences in neuroscience by understanding the levels that exist between them.

Below I describe a network which gives an example of the way that neuronal processing can give rise to the higher level ideas that we think in.  It is a highly (highly highly!) simplified model, but hopefully will serve to demonstrate the idea.  At the bottom of the page, I discuss how biologically relevant this model is, along with the more complex models that I based it upon.

Similar to the way the retina is activated by light stimulating different photoreceptors, but what we percieve is different people, animals, things, etc, this network will be stimulated as a series of light or dark points on a layer of "retina" cells, and will decide which of a number of shapes is being formed by the light and dark patches.
The way in which the network is going to solve this problem is to employ hierarchical processing.  Each subsequent level of the hierarchy will recognise certain patterns in the activation pattern of the previous layer.  Here is an example:
One of the special things about this network is its hierarchical structure.  At each level the cells look for patterns in the previous layer of cells, so as the information travels further up the hierarchy, active cells represent more complex combinations of features.  Here is a simple illustration of this: 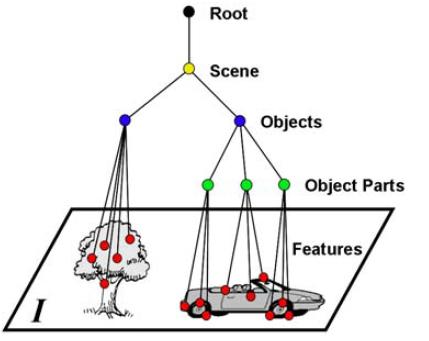 One thing you may notice about this picture is that even though the things being recognised become more complex as we look up the layers, the cells in each layer are not actually doing any different job to the cells in the other layers...


In each layer the cells simply find patterns that exist in the activation of the previous layer.


This is the amazing thing!  Think about this for a moment; even though the ideas are becoming more and more complex, the neural layout that is processing them is the same.

Below there is an example of how the network I made does this.  I've used the 'worm' pattern which I showed you earlier.  The network consists of four layers of neurons, and the activation flowing from layer to layer is shown as black cells.  Each layer's activation is solely dependent upon the previous layer only. 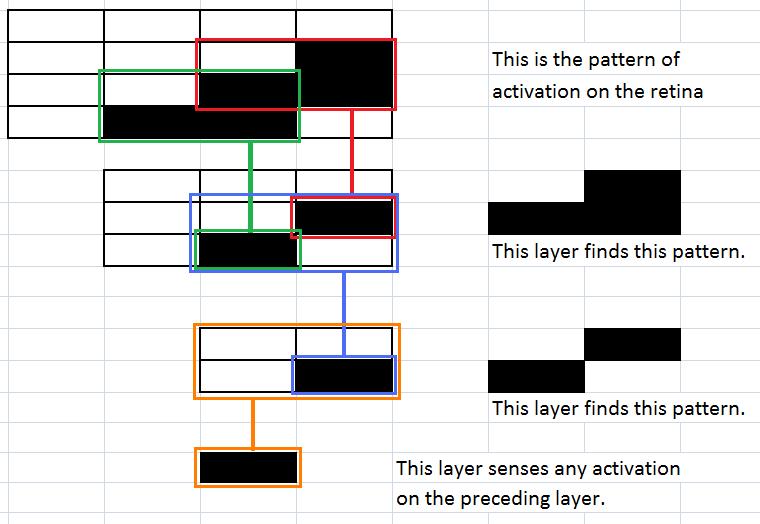 The first layer is the retina.  When a worm appears in the visual field, its form is projected upon the retina.


The next layer (layer 2) has a similar 2x2 pattern detector which searches layer 1 for a diagonal line.

The final layer contains only a single cell.  This is active if it detects any activity at all in the previous layer.  This last layer is like the grandmother cells that you may have heard of.

This model is quite complex, so rather than having you make the full thing, I'll show you how to set up one pathway down the hierarchy, then give you the full program later.
The pathway we will make together is the one that recognises the "worm" pattern anywhere on the retina (like the example above).  It will be composed of:
Where is layer 3?
To detect "worm" and "water, only 3 layers are detected (layers 1, 2 and 4), while the "X" and "O" require one more layer (layer 3).  Don't worry about it till later.

We have set up a "worm" detecting hierarchical network, so the only tests that we can perform are whether a worm is present somewhere on the retina or not.  There are four possible positions that a worm can appear on the retina (shown below).  Try each of them.  If the network is functioning correctly, the layer 4 neuron should output 1 in each of these four cases.

Would you say that this is a reasonable error to make?  Do you think the final picture above looks like a worm?

Here is the full thing:

Download File
The complete network is considerably more complex.  I've tried to make it as easy as possible to work out what everything does by colour coding and separating the layers, and having black and white (and purple and white) pictures next to each area in a layer to show the pattern that it is searching for.  Here is a picture of the full thing:

The bit that you just made is down the left.

On the other end of the hierarchy, down at the bottom, you will see that each concept cell in layer 4 has a purple and white picture below it.  I used different colours here because this is NOT the pattern that this cell is looking for in the previous layer, but instead it is the top-down overall pattern that is understood (the combination of all previous bottom-up layers).
If you look at the right hand side of layer 2, you can see two purple and white patterns.  If you click of any of the cells in the layer 2 pattern detectors for "X" or "O", you will see that they are connected to cells in both the 2 detectors and 3 detectors in layer 1.  I found it easier to see what the top-down goal was at this point, which is why I used the purple and white picture.
Another useful feature I added is the colour coding of active and inactive cells (1s in a darker shade that -1s in each layer).  You can do this too using the Conditional Formatting function in the Styles section of the Home tab in Excel.

To test this network, you can use all the same kinds of tests that we used earlier for the one you built.
Have a good click around all the different cells.  Try to understand exactly what is happening everywhere.

The visual system, from retina to higher areas of the visual cortex, functions hierarchically.  When visual information enters our eye, it actually goes through quite a lot of processing in the retina before it even starts its journey down the optic nerve to the brain (see my Retina page).  The model presented here skips this retinal processing because we have the luxury of using clear pictures, whereas the images that the eye sees may be fuzzy, incomplete, or unclear in many other ways.
Later layers of processing in the brain add increasingly more complexity to the visual data.  V2 does much the same kind of thing as V1, but also adds some more psychological functions, such as the working out the orientation of illusory contours, field and ground differentiation, and binocular disparity.  However, apart from the increasing complexity of the information they manipulate, relatively little is known about how extrastiate (not V1) visual cortex functions.
Inferior temporal (IT) cortex is known to be involved in object recognition, as lesions here can lead to inability to differentiate between objects (trying to eat your phone and phone with an apple).  They also have much larger receptive fields and are not retinotopic (light that hits the retina in adjacent positions doesn't necessarily reach IT in adjacent positions).  These last two features are both found in level 4 of the model presented here, which is the object recognising layer.

differences to the biological system