Computational Neuroscience     in  excel
Neural networks are not the only theoretical way we have to model and study nervous systems.  They may not even be the most appropriate.  Here I'll briefly show you another very influential approach to understanding what our brains are doing.  In order to do this, I'll use the illustration of classifying primates into one of three groups (ape, australopithecine & homo) based upon two variables - brain volume and body weight.  Imagine that you have a bunch of samples (living animals and known fossils) which you are using to help you classify any new fossils or skeletons found.

The whole thing is shown above.  The upper part with the samples is much the same as in the neural network, except instead of the two neurons on the right, there is a group of four parameters for each genus: the average (mean) body weight (BW) and respective standard deviation, and the same two parameters for the brain volume (BV).

These parameters, along with the absolute number of samples in each genus, are used in the bottom left to calculate some probabilities of seeing an instance of any genus.

When you show the classifier an unknown sample, it calculates the probability that this sample is each of the three genera, then compares the probabilities and goes with the highest, as shown by the blue bars.  Right now it's looking at a rather ape-like homo.
Below I show bird's eye views of the Gaussian distributions for each genus.  If you slide over to the far right of the program, you'll find these plots.  The sample space is the same for all three, but they are plotted separately because I can't find an easy way to get them on the same plot in Excel!
Anyway, you can see that the australopithecine genus has a lot of overlap with apes and a little with homos, suggesting shared features. 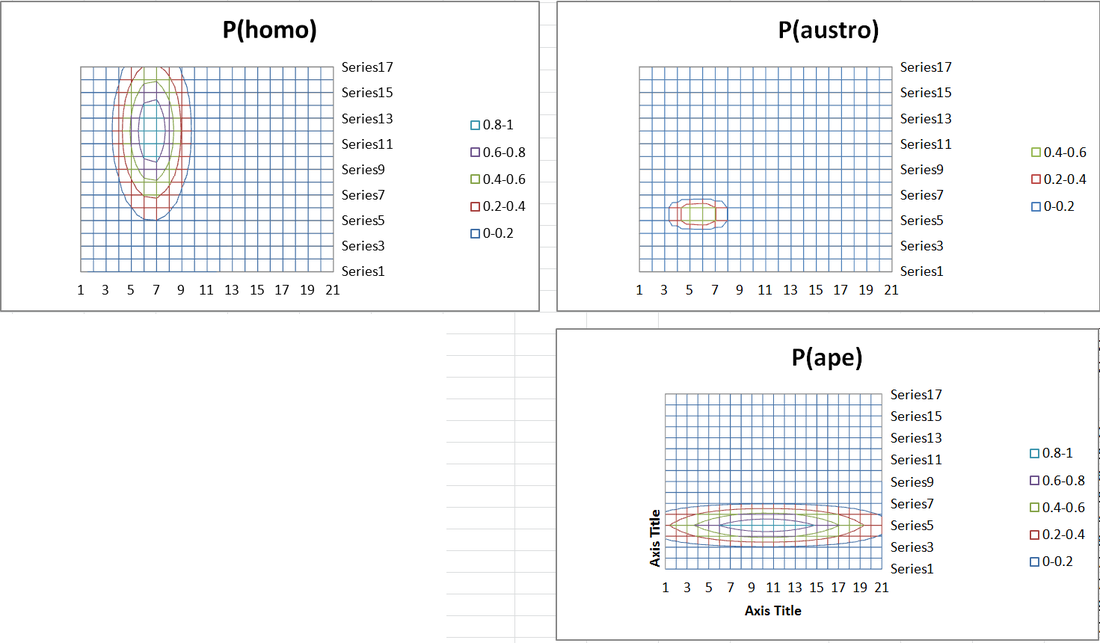 Change the variables of the fossil the classifier is looking at by changing the values in cells C13 and D13.