Some advantages of artificial neural networks 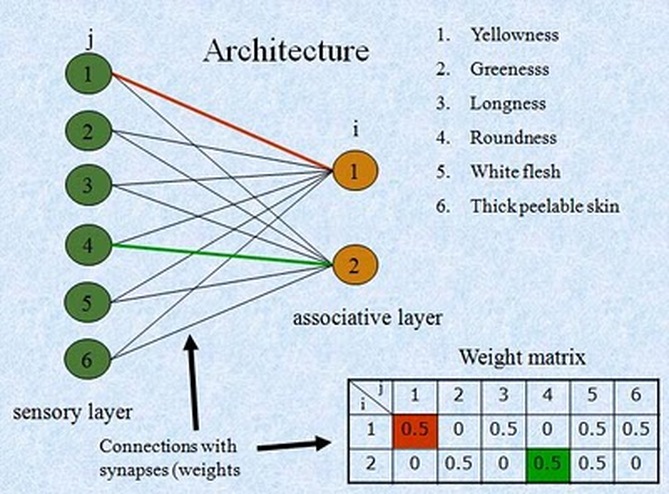 In cognitive science artificial neural networks often come under the banner of 'connectionism' or 'connectionist systems'. This distinguishes them from the symbol processing systems that have traditionally been the foundation of computational work in cog science. It also distinguishes them from ANNs used for purposes other than cognitive science, since ANNs can be applied to all sorts of problems in industry, finance, etc.

Connectionist systems have several advantages over symbolic systems. The ones we'll focus on here are graceful degradation and generalisation to data which was not seen in training. Both of these arise because of the distributed nature of the processing in a neural network. To demonstrate these two phenomena, we'll build a simple little network that is able to distinguish fruits based upon their features.


The six green circles are the six feature sensors. You can think of them as something like photoreceptors in the eye.  When a fruit is presented to the system, they become active or not depending upon whether the fruit has the feature that they are specialised to detect.  The first sensory layer neuron will detect a value of 1 if the fruit has yellowness, and 0 if it doesn't, the second a value of 1 if the fruit has greenness, and 0 if it doesn't, and so on for the six features listed. 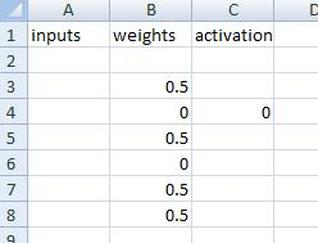 There's no need to have this network learning, so we can use a a very simple basic set-up.

There are six inputs sensors, so we need to have six weights going into each of the two associative layer neurons. That makes 12 weights in all, but we'll just do one neuron to start with - associative neuron 1, which becomes more active the more similar the fruit is to a banana.  So, set up your neuron as such:
The input spots are empty at the moment because the network isn't currently looking at anything. The six weights are set to the values in row one of the table we saw above. The activation of a neuron is the sum of all inputs*weights (input1 times weight1     plus     input2 times weight2,...    etc), so we need to make these connections in Excel.  You can do this by clicking on the association neuron's cell (cell C4 in the picture) and typing in or copy & pasting the sum below.

. After you've done this, when you double click cell C4 it should bring up the following:

That's neuron 1 set up. Now we do the same for neuron 2, bearing in mind that the weights should be the values in row 2 of the table from the first picture.

When it comes to creating the formula for the activation, remember that the inputs to both neurons are the same, so the formula to enter into cell C11 is:

Double clicking the cell that contains the activation for neuron 2 should lead to the following display: 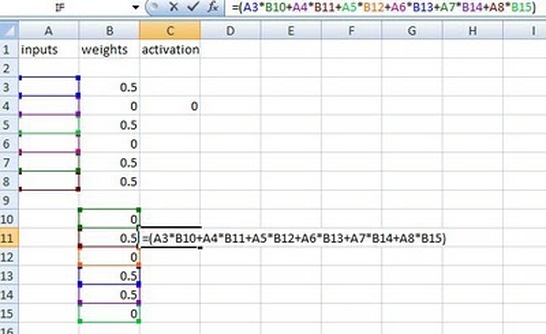 And that is our two neuron network finished!

The next step is to create the inputs. I'm going to create a little table below the network to hold these. When we present a fruit to the network, it will be a case of telling the feature sensors to refer to one of the lines of this table. Mine looks like this:

I don't want to have to change all six inputs every time I present a different fruit to the system, so I'm going to automate the presentation process. 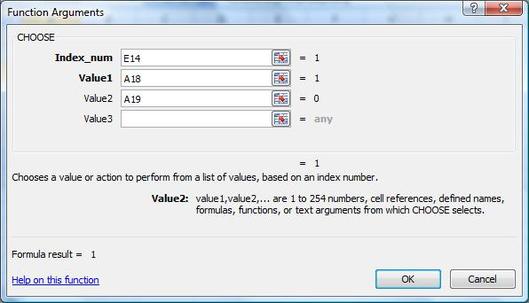 Let's check if it works as we intended. Go to cell E14 and change the 1 to a 2. Do all the values in our feature sensor cells (A3:A8) change from the banana to the apple? Change E14 back to 1. Do they change back to banana?

That's the network finished. If you present different fruits to the network, it should tell you whether it's an apple or banana by outputting a greater value from either the banana cell (neuron 1 - cell C4) or the apple cell (neuron 2 - cell C11). Just to make it pretty, I like to add a final little bit of code. Click on cell D7 and input the following:

You'll see what this does if you play with the system!

Just in case you have got stuck anywhere along the way, here's a video that shows what's in each of the cells:

Playing with the network...

Ok, that's the network. Now we can go ahead and demonstrate generalisation and graceful degradation.

We've seen that the network recognises normal bananas and apples with no problems, but what about an abnormal one. Bananas are green before they become ripe. Let's add an input for a green banana. Modify your input table as such:

where the final input, A20, is the part I've just added. Do this for all six feature sensors.

What features would these things have: a golden delicious apple, a peeled banana, apple sauce?
Design your own inputs for the above, add them to the Excel program and test the outputs. Does the network perform as expected on all of them? Pay attention to the difference between the output values in all cases.

My apple sauce was zero for all of the features except for white flesh and the output was 0.5 from both neurons. This would mean that the network has no idea whether it's an apple or a banana. If you'd never experienced apple sauce before and were unable to smell or taste it, do you think you would be able to tell the difference?

From the above tests, you should gather that this simple little network is able to generalise from the things that it's had experience of before to things it's never experienced by using the knowledge it has about normal apples and bananas.


Next onto graceful degradation...

If a system exhibits graceful degradation, it doesn't completely break suddenly because a little bit of it is damaged or because the input to the system is noisy (not perfect). Instead performance decreases a little bit for every little bit of damage or extra noise.

Firstly, we'll simulate a noisy input. In the picture below you can see that I've changed the value of the 'white flesh' feature from a 1 to a 0 (in the orange cell). You could think of this as being caused by a speck on the camera lens, or a cataract on the animal's eye.

Try playing with noisy inputs by changing the values of different features of the banana and apple. You can also try changing the values to values other than one or zero - how about 2? 5? -1? -3? How many features can be noisy before the system becomes unable to distinguish apples and bananas?

Now onto what happens when we damage the system a little bit. In this case, damage refers to tampering with the weights since this is where the information about how to perform is stored. In the picture below you can see that I've changed the weight from the first feature sensor to neuron 1 from a 0.5 to a 0. 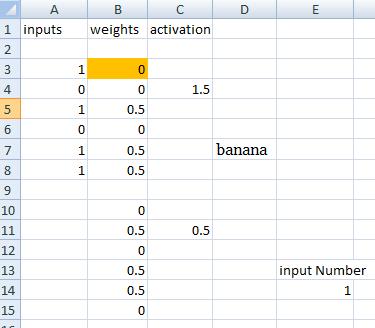 You should find that performance decreases proportionately to the damage you incur on the weights. This is strongly equivalent with the way animals brains are capable of incurring damage without breaking completely: Parkinson's, Alzheimer's, lesions, etc.